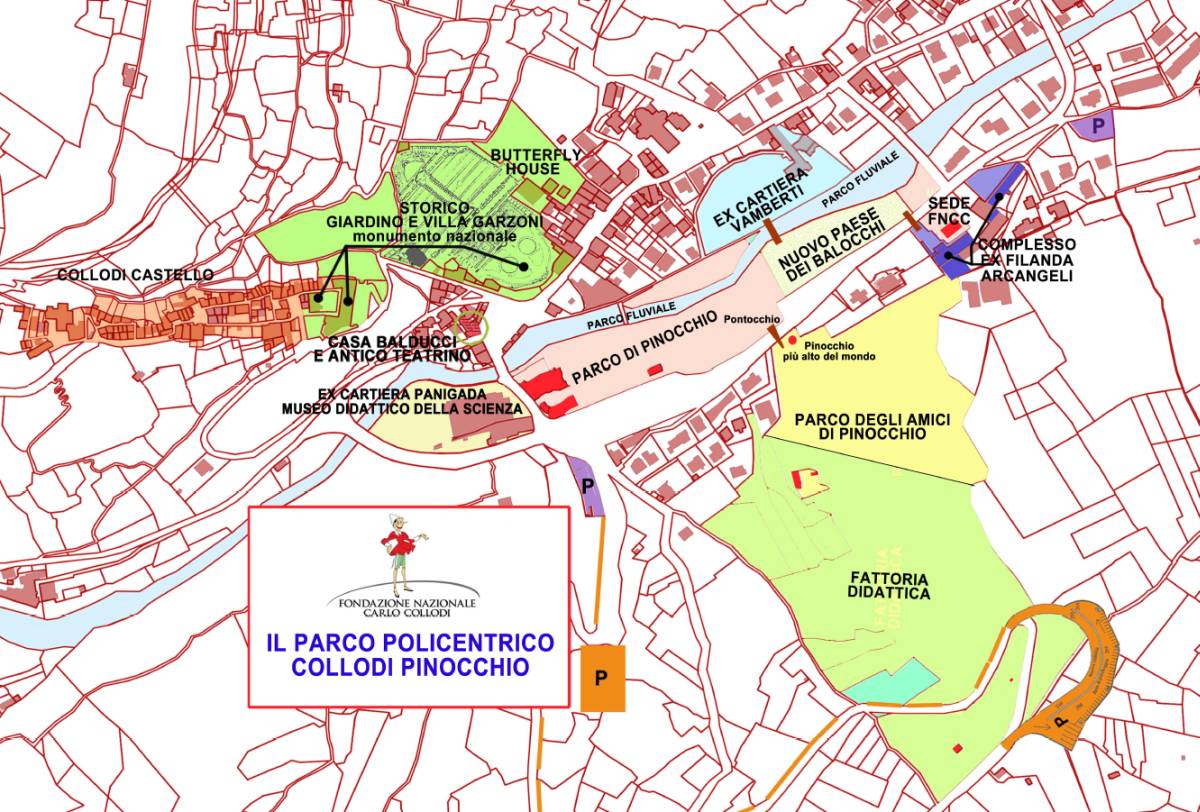 The Collodi-Pinocchio Polycentric Park project seeks to enhance the quality of the Collodi area and confirm the cultural roots of the Adventures of Pinocchio in this ancient Tuscan village, from which its author took his pen name.
The Collodi Foundation developed the project following the local authorities’ plan and guidelines. The project went through several decision stages: the presentation to the European Parliament with a large exhibition (28/11/1995); the Planning Agreement (20/05/2000); the Program Agreement (9/05//2001) with the Tuscany Region, the municipalities of Pescia and Capannori, and the provinces of Pistoia and Lucca; a constructive meeting at the Council of Ministers’ Office of the President on 15 September 2016; and, to reaffirm the agreements and the willingness of the institutions, a letter from the Collodi Foundation addressed to Minister Franceschini (21/01/2020) signed by the President of the Tuscany Region and by the mayors of Pescia and Capannori.
The Collodi-Pinocchio Polycentric Park offers the following: maximum comfort and convenience for residents and visitors, an image of Collodi as a place dedicated to children through Pinocchio and his adventures, development of Collodi as the European Capital of Childhood and a driving force of the European Fairy Tale Route, with Pinocchio and his friends (Alice, Shockheaded Peter) as ambassadors. The presence and role of the Collodi Foundation, a non-profit, public/social organization controlled by participating local and central institutions, guarantees the pursuit of educational and social purposes unrelated to any forms of speculation.

The Collodi-Pinocchio Polycentric Park is a project for Collodi, Tuscany, and Europe. Pinocchio’s hometown becomes an edutainment park promoting education, culture, art, architecture, the environment, tourism, the economy, work, and livability. Today, the park represents the best opportunity for encouraging the area’s economic revitalization.
The project has paid particular attention to the issue of acquiring and renovating the villa and the Garzoni Garden, examples of 18th-century art and architecture that will be integrated with the park’s new structures and extract its economic and cultural benefits.

The park’s creation also requires finding a definitive solution to the severe local traffic problem, with 250 trucks/day passing through Collodi to supply the paper industry in Villa Basilica. This solution would reduce the extreme inconvenience for locals and enable Collodi to accommodate much greater tourist flows than at present. The pedestrianization of Collodi’s center will also contribute to this condition, which is essential for any investment to increase the area’s potential.

The park intends to protect and promote the priceless natural environment of these Tuscan foothills, the local community’s social interests, residents’ living conditions, direct youth employment, and the development of related industries. The presence of tourists and service-related businesses and merchandise producers will be significantly increased, providing Pescia, Capannori, and Villa Basilia with concrete economic and work benefits. In addition, it will help in a more general way that vast section of Tuscany, between Florence and the sea, including the Montecatini Terme area, whose hotel and spa businesses have been in crisis for some time.
Collodi’s tourist movements are exemplified primarily by families with children and schoolchildren. However, there is no lack of social tourism and older travelers. In addition, 35% of all visitors come from over 40 foreign countries. It is believed that the Collodi-Pinocchio Polycentric Park, once completed, will see a significant increase in arrivals (from 150,000 to 600,000 visitors per year) and in the average time spent in Collodi and surrounding areas, with clear economic benefits for all tourist income. The expected increases are plausible as they are compatible with the area’s morphology and infrastructural/environmental features.
The plan will contain structures that increase the resident population’s opportunities for social relationships and cultural exchanges. Specifically, the construction of the headquarters and library of the European Society of Culture—SEC will have Collodi become part of an international relations network by also collaborating with the SEC archives in Florence at the European University Institute. Visitors will be encouraged to visit Collodi Castello, the historical upper part of the village, as businesses and meeting places reopen. At the same time, the river park will be the green lung for exploring and visiting the entire village.
The Collodi-Pinocchio Polycentric Park assumes an importance beyond its effect on tourism and the area’s economy. It finally corroborates that Pinocchio truly belongs to Tuscany and Italy, a fact not always known and accepted abroad. The park’s creation will let Pinocchio be rediscovered and re-appropriated as a cultural symbol of Italy and ambassador of positive values, involving various areas: schools, publishing, media, and Italian-made merchandise. The initiative’s national and international value is increased by this ideal juxtaposition of Collodi and Florence, where Pinocchio’s author was born and lived. Today, it hosts the Pinocchio Museum Experience.
The Polycentric Park project is designed to be carried out in successive stages and will move forward as the necessary funding is found. In its entirety, the project expects 100 million euros in funding. However, in recent years, the Collodi Foundation’s investment of its own funds and the local authorities’ commitment have led to completing part of the project. About 50 million euros will still be required to complete the remainder of the project. This figure does not include work on Collodi’s viability, which is necessary to continue the project and for which the local public bodies are responsible.

A summary outline of the objectives in the following functional phases is provided below:

Works and acquisitions already concluded
1.    The Monumental Park of Pinocchio (D.Lgs. no. 42/2004, place of culture)
2.    Acquisition of all areas for the Polycentric Park already concluded by the Collodi Foundation using its own resources.
3.    Design of the entire Polycentric Park and final design of the lots under construction, already carried out with the Collodi Foundation’s own resources
4.    Construction of the Pinocchio Interactive Museum–MIP, already carried out by the Collodi Foundation using its own resources
5.    Management of the Garzoni Historic Garden (national monument) coordinated with Pinocchio Park
6.    Construction of the Butterfly House
7.    Construction of connecting road infrastructure already concluded by the Province of Pistoia and the Tuscany Region
8.    Restoration and recovery of the ancient village of Collodi, already completed by the Municipality of Pescia

3.    . Infrastructure construction that permits visiting the Polycentric Park as a situational and cultural unicum

Open the Collodi-Pinocchio Polycentric Park Project pdf to find out what is coming. 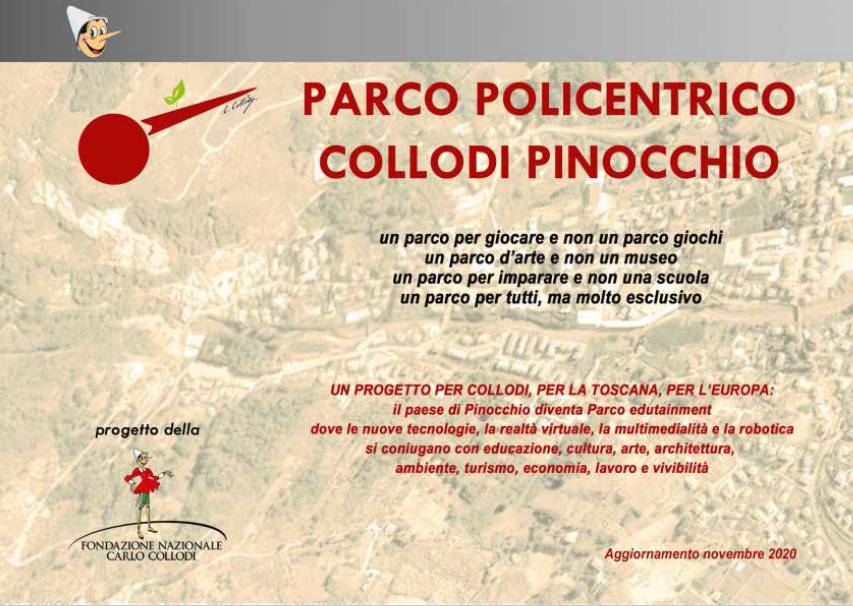